Before starting this process you should definitely take backup of database to another digital place (Usb flash disk, cd or another computer)

It’s possible to upgrade from V3 to V5 directly. We recommend you to perform this process, upgrading step by step. First transfer V3 data into V4 version and then transfer V4 data into V5 Pro.

After backing up used database, according to warnings above, download SambaPOS 4.1.82.exe setup file from https://sambapos.com/download/

After installing a standard V4 on a computer login to V4. If V3 is still running on computer it has to be stopped.

After running V4 Manage > Local Settings > Database Connection in this section type exact same database connection address which being used for version 3 and add to the end Database=SambaPOS3;

In the example Database connection settings for SamabPOS V3 is like below; 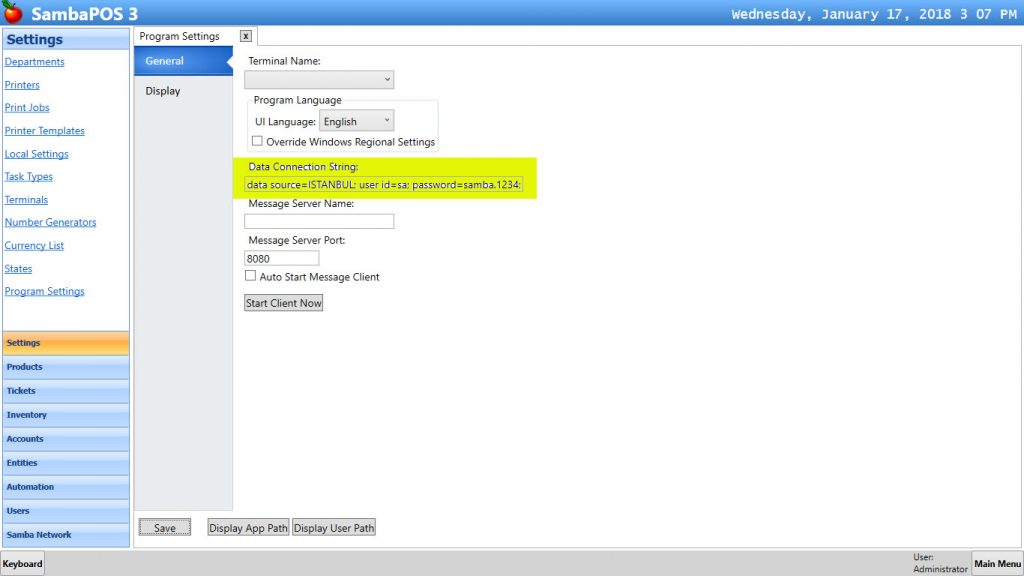 Edit database connection on SambaPOS V4 like shown below, click on Save button and close the SambaPOS. 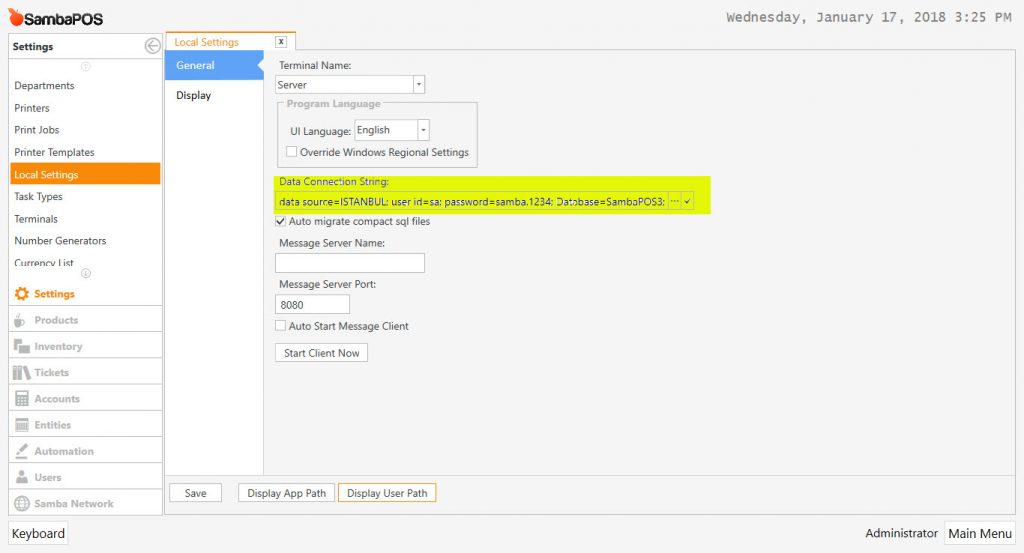 After writing Database Connection, close the SambaPOS and run again SambaPOS 4.1.82.exe file which already downloaded on computer and install over it.

Note: This setup will give information about database has been changed and V4 needs to update database according to itself. This is why don’t run SambaPOS after writing Database Connection and log off then install over it again.

After writing and installing over it SambaPOS V4 database connection, run the program. So that database file has been transferred from V3 to SambaPOSV4.

After transferring the data into SambaPOS V4, do the same for V5 Pro.

Download and install latest version of SambaPOS V5 Pro from here https://sambapos.com/download/ After running the SambaPOS, on the navigation screen go to Manage > Settings > Local Settings and click on Database tab.

In here click on Edit Connection button. Make this field possible for writing and type the exact same sentence which existing in SambaPOS V4. 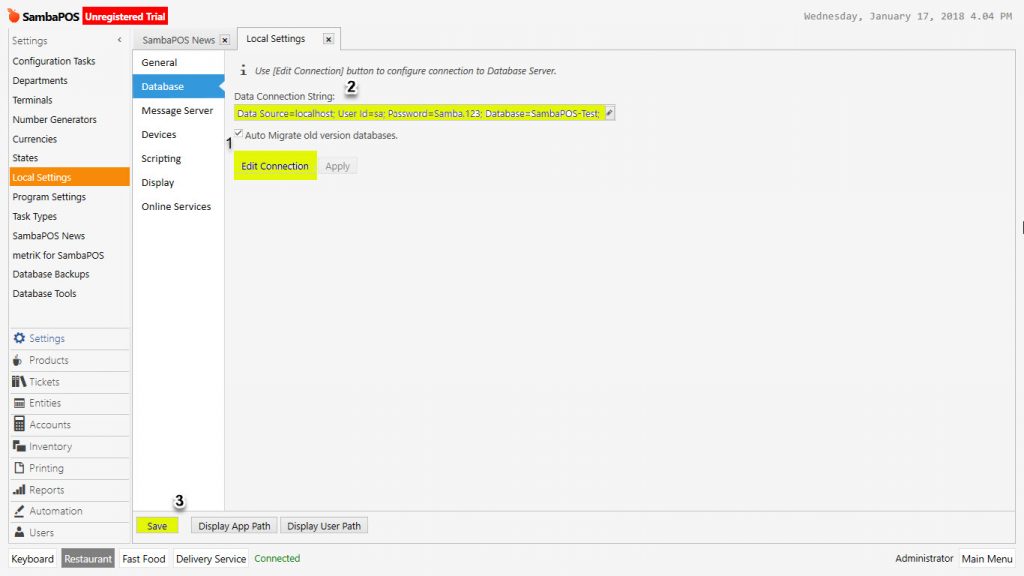 After installing again SambaPOS V5 Pro run it. On the navigation screen enter Manage > Settings > Program Settings > Maintenance > Upgrade Old Rules click on this menu so that old rules will be updated according to latest version. 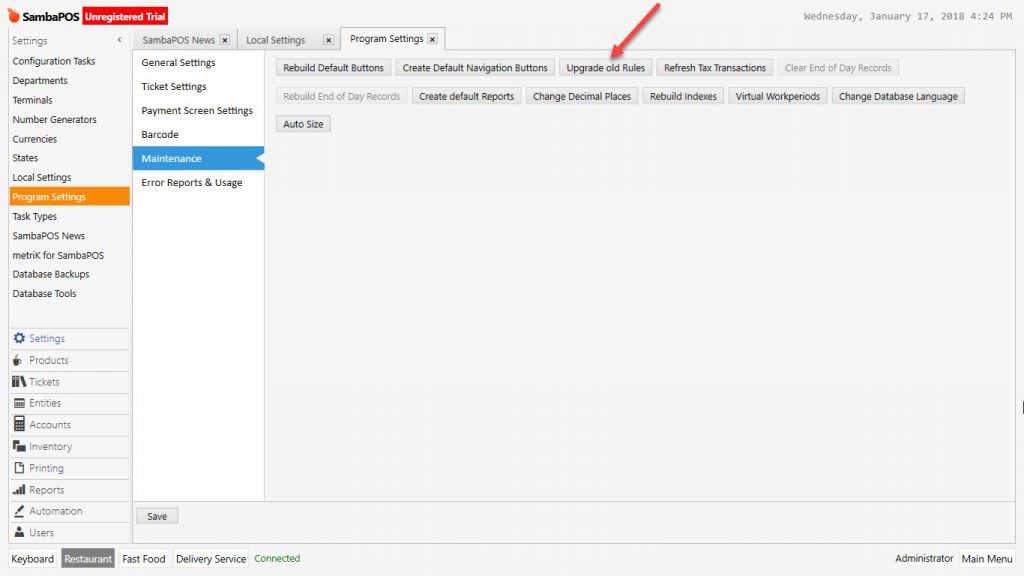 A dialogue box will appear which saying that how many rules have been upgraded depending on using old SambaPOS V3 or SambaPOS V4. 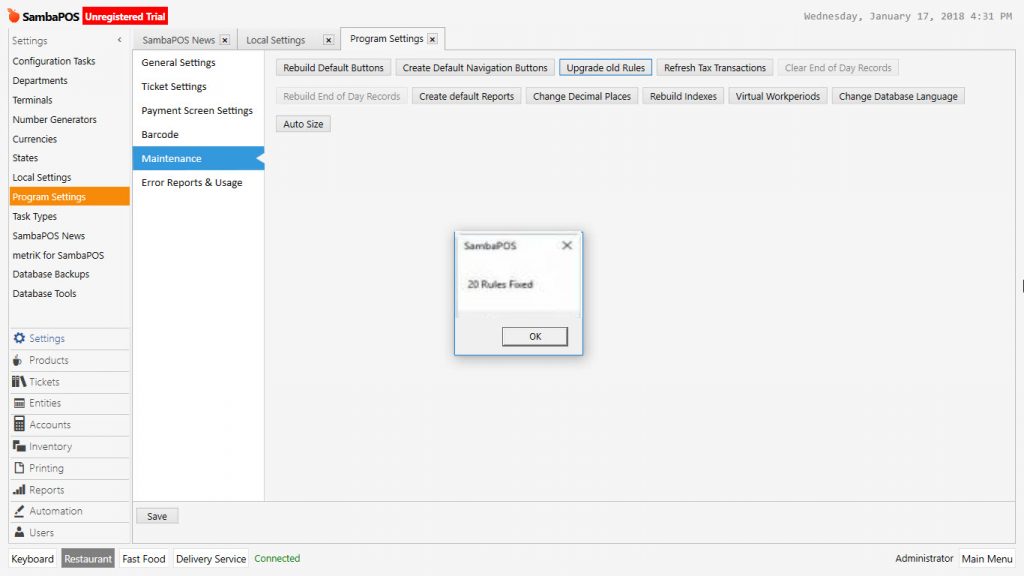 So that data transfer is completed.

During the data transfers for new versions, recreating Database indexes is essentially important. So that SambaPOS can provide reports fastly and works fastly. 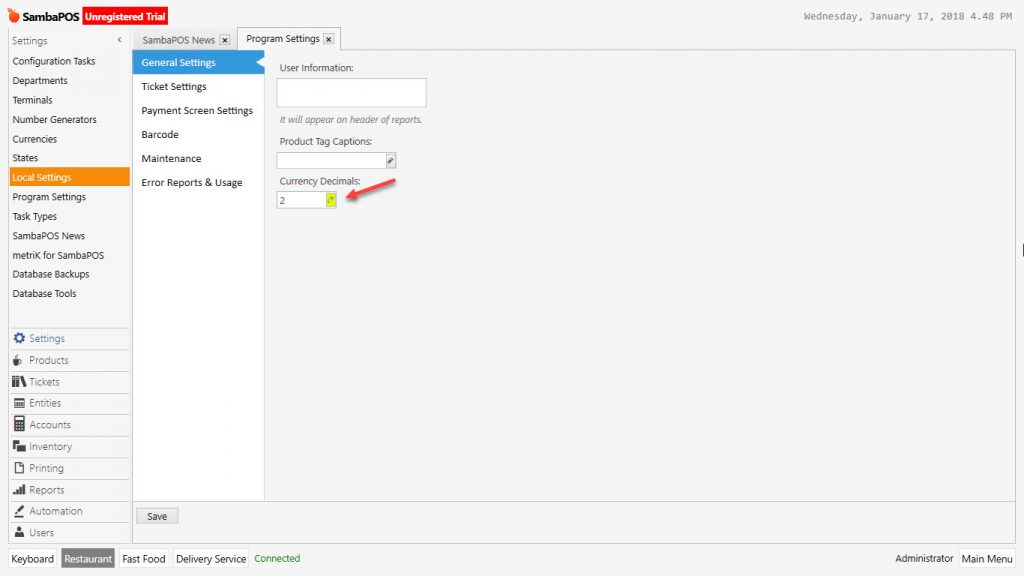 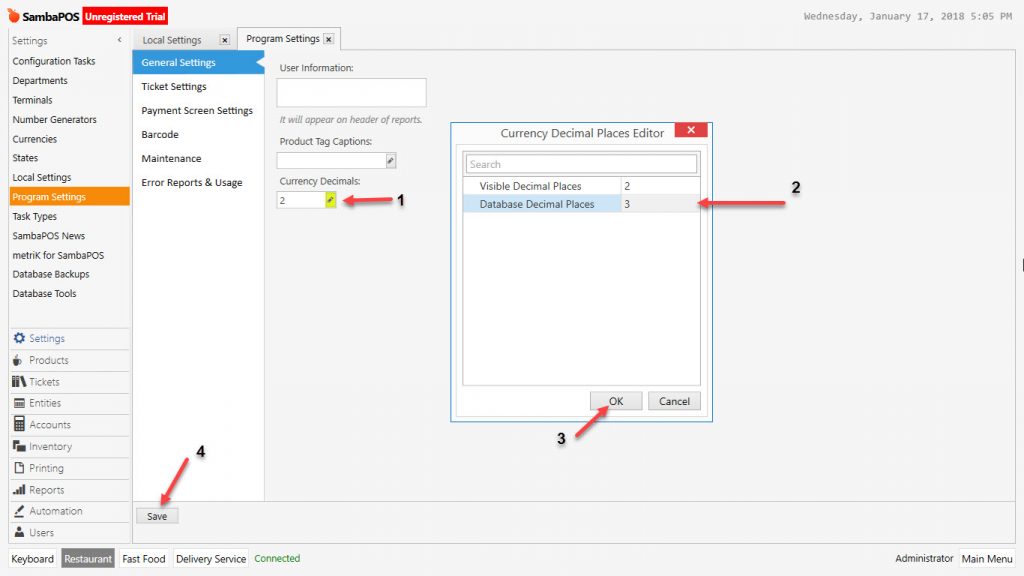 In the window change Database Decimal Places field from 2 to 3 and click on Save button. After clicking on Save button (it might take few minutes depending on size of database) SambaPOS comes back to password screen.

Type password start again and perform same steps and change back the value from 3 to 2 which is original value. Database will be ready once you restart SambaPOS after logging it off completely.